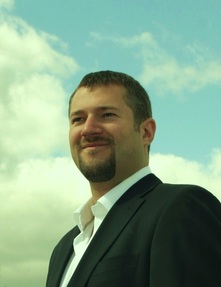 Our Director, James Davey (Photographer - John Davey)
James began his musical career as a chorister and brass player at St. Mary's parish church, Saffron Walden. He later gained a place at the Birmingham Conservatoire studying trumpet and cornet, where, during his final year, he decided to form a choir. This first experience of conducting, inspired by singing with the National Youth Choir of Great Britain and the critically acclaimed Laudibus, marked a significant turning point and James was allowed to adapt his BMus degree course to reflect this change in direction, even though no official courses in Choral Direction were available from the Conservatoire at the time.

In 1999, James took up residency at St Paul's Cathedral School as Music Assistant and formed Chantage. Since then, he has studied conducting under many eminent choral figures, attending the Voices International Conducting Symposium, working under Michael Brewer and Ralph Allwood, and participating in the Association of British Choral Directors Conducting Course, headed by Peter Broadbent and Therees Hibbard.
​
The success of Chantage is evidence of his talent and continued dedication to choral music. In 2002, James took up an appointment at the BBC, leading a project to re-catalogue the BBC's vast collection of choral sheet music, and acting as the archive's chief choral advisor. This was a great opportunity for James to broaden his knowledge of choral repertoire. Whilst at the BBC, James gained valuable experience working with the BBC Singers, the UK's only full-time professional choir. James is currently working as a freelance choral conductor and singer.

Find out more about James